the Celts knew mistletoe as a plant with healing capacities, but only in 1920 Rudolf Steiner
and Ita Wegman described its specific potential in cancer therapy. This potential is connected
with specific features that Viscum album shows when developing in time and space.
Mistletoes in general are not able to form a root. They depend on wooden host plants which in their xylem continuously provide water and nutrients to the parasite. Viscum album lacks several specific features of the normal plant root.

While normal plant roots grow centripetally, generated by a tip meristem and orientated by a
sense for gravity that is located in the root cap, Viscum album shows centripetal growth only
when actively penetrating the bark of the host branch. The
sinker – a new organ formed by the haustorium within the host’s
wood tissue (Fig. 2) – grows centrifugally, generated by an
intercalary meristem which is permanently embedded into the
host cambium.

Normal plant roots expand their surface by elongating peripheral cells and protruding into the
surrounding soil solution with hair cells. In contrast, the mistletoe sinker keeps the surface
small and differentiates xylem structures within the sinker parenchyma only when in contact
with the host’s xylem sap.
While normal plant roots in their endodermis actively control the influx of minerals from the
soil solution, host xylem and mistletoe xylem have open connections without any control
feature. The uncontrolled influx of host xylem sap into the mistletoe sinker is fundamental for
the host specificity of mistletoes growing on different trees.
Shoot development of Viscum album is strongly reduced. Axillary buds do unfold only a
single stem with one terminal pair of simple leaves per vegetation period (Fig. 3). In contrast,
the normal feature for higher plants (angiosperms) is a leaf spiral with several, highly
differentiated leaves. While shoots of higher plants develop centrifugally, the mistletoe shrub
tends to be self-centred and to resist
centrifugal growth. 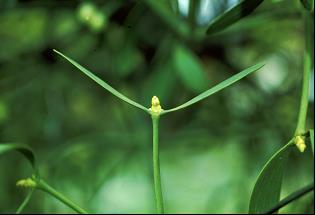 The reduced formation of vegetative organs is induced by a switch from vegetative to
generative differentiation in the axillary buds by the end of June: From April until midst of
June the primordia of new vegetative shoots – like bud scales, stem and leaf pair – are
preformed; after summer solstice the vegetative development ends with the differentiation of
a generative short shoot bud, at the bottom of which a meristem rests until next spring the
differentiation of flower organs starts.
Generative organs dominate the development of Viscum album. Three terminal flowers are
formed on each twig and blossom in late winter; male and female flowers develop on
different shrubs and are pollinated by insects. Mistletoe fruits ripen about nine months after
flowering in November (Fig. 4). Birds like mistle trush, blackcap, and waxwing feed
themselves from the berries and thus ensure the dispersal of mistletoe embryos. 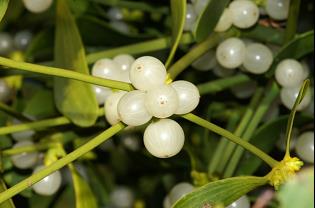 Fruit development starts as a vegetative process with the augmentation of endosperm, but
switches to generative differentiation of embryos within the endosperm by the end of June.
External symptoms for the internal switch from vegetative to generative development are
nutation movements of the unfolding young mistletoe twigs that are synchronous from end of
May until end of June. The autonomous movements emancipate the new generation of shoot
organs from the negative geotropic orientation which is usual for higher plants; after summer
solstice they lead to the typical sphere of Viscum album shrubs.

The tendency of mistletoe to develop in opposition to the polar features of normal root and
shoot growth is mirrored by a polarity in its pharmacologically relevant substances. In cell
culture experiments mistletoe lectins exhibit centripetal characteristics: they cause the
agglutination of the cells, slowly reduce the physiological activity within the cells and finally
induce an apoptotic cell death. These features are comparable to the slow centripetal growth
of roots within the soil. Consequently mistletoe lectins show highest concentrations in the
centre of the mistletoe shrub, where the sinker is formed instead of the root, and in the oldest
stems which in contrast to other perennial plants do not harden into wooden structures.

Viscotoxins on the other hand cause a sudden cell death by destroying cell membranes and
causing a centrifugal efflux of cytoplasm and cell organelles. These features are comparable
to the normal centrifugal gesture of shoot growth. Consequently viscotoxins show highest
concentrations in the periphery of mistletoe shrubs: in leaves and short shoots, where
normally centrifugal shoot growth processes would induce the development of several highly
differentiated leaves.

Mistletoe lectins and viscotoxins are poisonous substances, typical for Viscum album, and can
be regarded as a compensation for normal root and shoot growth processes. In the mistletoe
plant these normal processes do not reveal externally in morphological features, but manifest
internally as pharmacological relevant substances.

Polarity as a key attribute of mistletoe has been known already in ancient times, for example
in the Nordic mythology. In the Younger Edda the god Baldr is being killed by two opposing
characters: by Loki – a bright head and flexible character showing centrifugal qualities and
being connected with the light; and by the blind, but strong Hoedr who is connected with
darkness and gravity and represents centripetal qualities.

In Celtic times, two druids represented the polarity when cooperating during the harvest of
mistletoe: One druid was dressed in white and riding on a white horse with a golden harness;
he had a golden sickle to cut the mistletoe. This druid was active and by his attributes
connected with the force of the Sun. The other druid was dressed in black and riding on a
black horse with a silver harness; he stayed passive during the harvest and by his attributes
was connected with the force of the Moon. When they harvested mistletoe on the sixth day
after the Winter New Moon, the cosmic signature showed Sun and Moon almost in balance
and combined the two polar forces in one image.

Anthroposophical mistletoe pharmaceutics develop the polarity of mistletoe further. Viscum
album is harvested twice a year: in June as summer mistletoe, in December as winter
mistletoe. Mistletoe berries make half of the winter harvest and are picked already in
November, before birds start feeding from mistletoe berries.

Fresh mistletoe tissue (leaves and stems not older than 2 years, plus buds and berries) is
broken up in a stone mill and combined with water of the same weight amount. After 3 days
of a guided fermentation the fluids are pressed out and the extracts are filtered before storage.
Summer sap and winter sap are then combined through a special mixing process with two
polar components: The summer sap drops vertically down from a height of one meter. The
winter sap is given on a titanium disk and rotates horizontally with a speed of 1900 kilometres
per hour. Iscador® – the cancer specific remedy – is created when the polar qualities of the
dropping summer sap and the rotating winter sap combine to a new and higher quality.
Experiments in botanical test systems confirm that this specific mixing process creates a new
quality in Iscador® that cannot be achieved by mixing summer and winter sap of mistletoe
with simple hand procedures.

Any cookies that may not be particularly necessary for the website to function and is used specifically to collect user personal data via analytics, ads, other embedded contents are termed as non-necessary cookies. It is mandatory to procure user consent prior to running these cookies on your website.